First some notable numbers from our main platform:

What’s the state of Legal and our Fair Society?

…then we had to take a little break when one of our robots broke down…we’ll survive.

Legalpioneer took most of our mind space but we still wandered into the Garage to unwind and tinker on weirdness.

I’m a curious soul so I will keep doing this for as long as I’m able. Nonetheless, I’m humbled by each retweet, like and view. Therefore I’m especially thankful for the opportunity to share this alternative perspective in a #BakersDozen interview.

You could also imagine my surprise when we landed on the front-page of the biggest newspaper of The Netherlands. I was happy with the fact we could answer the question with analytics, not anecdote. I hope a larger audience has become aware of the importance of LegalTech and it’s role in our society.

First, a general overview of some of the records in LegalTech for 2017. You can run each analysis below on our site and see the results instantly.

*Finally, here is one chart to put all of the above in a bit of perspective. Next year, we’ll delve deeper into Regtech and it’s adjacent markets to rationalize the value.

I always handpicked the three most remarkable startups of the year based on my 20+ years of experience. Not anymore, I got fired and replaced by a robot. This year, all picks are data-driven. Don’t cry because we’ll always defiantly celebrate the startups on our @Legalpioneer twitter channel. You can follow your heart and like them on Twitter.

Introducing the Eleven startups our math calculated as most ambitious of 2017. They were founded this year and were able to raise money right away. These startups are ranked based on our experimental Ambition algorithm. I ran several scenarios and the formula kept coming back with unusual results and notable absentees like Altruim LTS. Eventually, I surrendered and saved this set since it may offer us a glimpse from beyond what I can see.

We’ll keep tweaking and release special dashboards going back till 2015 to rank startups founded in each year. We’ll also open up about the algorithm…after we figured out how these damn robots work. 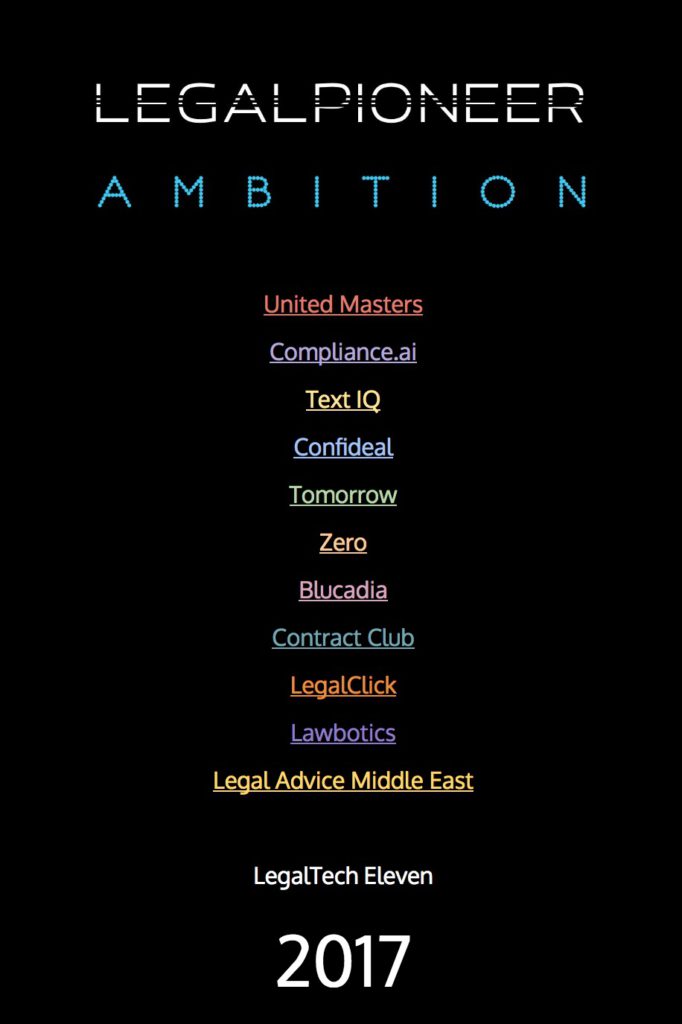 Better yet call it an awakening. We have been awakened by the #MeToo and #NotMe movement on Twitter. That peace and stability are fragile. That we actually have a social contract to give power to a few. In return, we hope that those in power will protect the liberties for all.

And all that seems unethical or immoral, we can develop technology to reckon with it. Not just any tech…LegalTech.