“Grandpa, What is a lawyer?”

“Well back in my days, we, humans, had some trust issues so we decided to have many rules in order for society to operate properly. This was before the great Computer Devolution*. Now, these rules became so complex that we needed special people to help us explain them. Much like an engineer teaches robots to behave before they can teach themselves, lawyers taught other people to behave with speech and text.”

“But who made these rules?”

“That’s the funny thing: before computers, lawyers use to conceive rules and made them so emotionally complex and conflicting that they were the only ones that were able to explain them. It’s also how they made a living. They called themselves Attorneys and they made a rule that no one else could be one unless you had a license. Just like driving a car”

“Don’t laugh, cars didn’t use to drive themselves. We bought and drove them manually. It really wasn’t safe. I’m lucky I survived.  Did you know grandpa went to a law school to become a lawyer? I survive that too”

the transfer or delegation of power to a lower level, especially by central government to local or regional administration. In this case, from humans to computers.

** In 2036, Uber transitioned from cars to drones for transporting goods and humans. They changed their name to Xuber to become an airline company and compete against Tesla Fleet.

Evolution of Law And How Lawyers Can Engineer A Fair Society

How many laws does it take to run one of the most digital advanced economies in the world? I stumbled onto some interesting figures while looking for an answer. Perhaps the most significant: Do we need any laws to manage human behaviors? And if not, how does law need to evolve to ensure a fair society. Here’s the story behind Evolution of Law slides and how to engineer law.

How many laws do we need?  in the Netherlands, we have a public law database: Wetten.nl and performing an empty search would reveal about 15,000+ pieces of legislation (inc. treaties) to date. Each piece of legislation represents one or more articles totaling 217,500+ articles.

The largest piece of law is the Corporate Finance Law and has 1231 articles. Robolaw Is A World Without Law“, hinted that the most significant part of the law was focused on regulating the flow of money. These numbers seem to back this up.

Surprisingly, finance wasn’t the largest area of legislation. When sorting laws by a number of articles, I noticed vehicle and traffic laws near the top. So running another search revealed that Finance represents 2% and Vehicle & Traffic 7% overall. Meaning, it takes more rules to manage the movement of humans as opposed to money.

Why do we go to court? In the Future of Law, I discovered that 70% are civil court cases so I was curious to see how these breakout by area of law. While I initially found 55% of case law research dealt with divorce, the reality is that courts are actually literally buried in personal debt.

Courts handle about 85% family law cases annually, from which 52% deals with private estates. This is largely due to the rise of the independent contractors and subsequent bankruptcies.  Below chart shows the impact of business versus personal cases brought before the courts over the past 5 years.

The 17% increase in private court cases above also illustrates the significant shift in litigation away from big law to micro law.  The economy of business law is shrinking since more ‘businesses’ are actually privately backed or crowd-sourced ventures run by, and staffed with independent contractors. These ‘people’  will likely have a more practical approach to law and more sophisticated taste in legal services. Most importantly: they may not even be able to afford the legal services based on the current business models.

Check out the rest of the charts.

Why should we engineer law? The Evolution of Law explains the phenomena and illustrate the impact on the current legal construct and its contingent economy. Every enterprise ran on a platform of law (rules and articles) which made it possible to do business in a certain geography. Now, they run on platforms of code (apps and networks) making it possible to connect supply and demand globally. These platforms can operate entirely outside the law. Better yet, they can actually run their own economy independent of any monetary or tax jurisdiction. So even if lawmakers catch up and codify, they can never keep pace and modify.

How do we engineer law? Legal professionals should surrender prose & speech and start coding law into platforms. It’s a natural progression for justice. If app developers and platform builders want to create trust between strangers, they’ll have to honor the code between humans. Blockchain is a great example of the need to engineer trust. Albeit Blockchain is the most popular, it isn’t the only way. Lawkit is a more approachable model to demonstrate how app developers may think of constructing transparency and fairness into their products. Yet, it will take an awakening and an army of Legalpioneers to ensure a fair market for 3.35 billion entrepreneurs.

Cannibalism and 5 Special FX of Evolution https://www.legalcomplex.com/wp-content/uploads/2011/03/Cannibalism-and-5-Special-FX-of-Evolution.jpg 1920 1080 Raymond Blijd Raymond Blijd https://secure.gravatar.com/avatar/b2107c5e41052042419dccfe176bcf5a?s=96&d=mm&r=g March 30, 2011 May 20, 2019
Read time: 2 min.
Most of what’s happening on the information super highway – at accelerating speeds – is just evolution as genuine as Darwin. Yet, most are still determined to call it cannibalism when a “new” service or product threatens the established business models. But as the saying goes: there’s so sense in beating a dead horse…better to trade it for a car while it’s still alive.

On one of the earnings calls for Apple, an analyst asked COO Tim Cook: do iPad sales cannibalize their PC market? His answer in short: No, on the contrary, but if it would eventually happen it would be for the better.

It did not dawn on me until seeing Steve Jobs presenting the iPad 2, that Apple has already given up on the PC market they have defined since its inception, and are moving on to next thing. Mr. Jobs kept making the reference to the “post-PC era” and I could hear Bill Gates echoing in the background.

Most may have forgotten, but the ex-Microsoft CEO was an early champion of tablets and voice recognition. Yet Microsoft’s business model (or thinking) did not permit them to go full blown for marrying the hardware and software to make tablets a success. If the Amazon Kindle had not proven to Apple that the timing was right we might still be waiting for the first real tablet. This is an example of why timing is everything and it does not always mean you have to be first.

The taste of 3D

In a PC market disruptions are common and adapting is crucial, but to publishers both are unsettling. A business that hasn’t drastically changed since the invention of the printing press needs some time to digest it all. However, it is still a gamble what will be the “next big thing.” For instance, the film industry took an enormous bet on 3D and it paid off. We all know 3D isn’t new (and gives headaches) yet the film industry posted record earnings partly due to this technology. Still, most can argue that 3D is still a huge gamble for TV manufactures and PC makers.

What is the Pay Off? 5 Special effects:

1. Halo effect: Tim Cook called the effect of the iPad “a Halo Effect from Apple product to Apple product.” Similarly, any digital version (web or app) of a paper product will initially boost its predecessor and not kill it.

2. 3D effect: Technology doesn’t have to be “new” or “innovative” to work. It just has to be done right with the purpose of adding value to utility and design.

3. Darwin effect: “In the struggle for survival, the fittest win out at the expense of their rivals because they succeed in adapting themselves best to their environment” (Charles Darwin). Adapting to a digital environment is having a fundamental understanding of its strength (distribution) and weakness (usability) and using both to your advantage.

4. Pricing effect: In my opinion, the biggest challenge for publishers is their business model: pay for content. This will be increasingly more difficult to justify because of the abundance of (free) information. Just ask the newspapers. 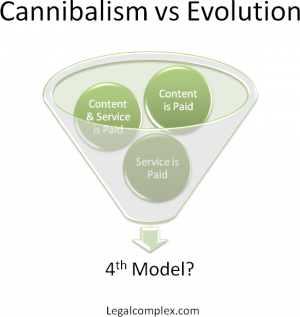 I foresee the following evolution in business models:

5. Goodwill effect: This a bonus effect due to all of the above effects. The marketing is in the product itself.