Phantom Menace: 4 Signs of Disruptions in Legal Technology https://www.legalcomplex.com/wp-content/uploads/2012/06/phantom1.png 1800 1000 Raymond Blijd Raymond Blijd https://secure.gravatar.com/avatar/b2107c5e41052042419dccfe176bcf5a?s=96&d=mm&r=g June 1, 2012 May 20, 2019
Read time: 3 min.
I recently discovered HBS professor Clayton M. Christensen’s book The Innovator’s Dilemma. In it he explains the theory behind disruptions and why they are particularly menacing if you are not prepared. There are companies like IBM that have managed to survive numerous disruptions by shifting models early or like Apple or Amazon by creating disruptions themselves. Nevertheless, timing is crucial to either shift or create but the real challenge lies in where to shift to or how to disrupt. What are the signs?
Phantom Menace

Here is a illustration of how inconspicuously disruptions occur and their menacing effect if you don’t anticipate:

A 17 year old IT student in Suriname explained to me why he likes Twitter more than Facebook. I asked why he stills uses Facebook and his response was: homework assignments. Contrary to Twitter, all his classmates where on Facebook which enabled him to connect and collaborate on their homework. Google – the organizer of the world’s information – wasn’t mentioned during our conversation.

Google is still the omnipresent phantom competitor for all publishers and does that without a single piece of curated content. This was achieved purely on the basis of superior technology. Yet they are now driven into a tough spot by something they were lacking by their own admission and now they are hitting back to overcome this lack of understanding how technology benefits people.

Google understood that the Internet needed a filter, Facebook understands that people just want to connect and Apple bets they will want to do conveniently on stylish devices. 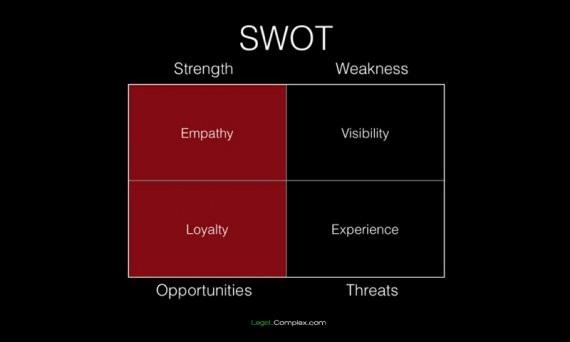 Traits
Here are some traits to identify disruptions:

1. Empathy: Disruptions fly in the face of convention and sometime turn a proven and time-tested business model on its head. But even more precariously, they demonstrate a keen sense of empathy towards users and a knack to invert the value of goods. Example:Wikipedia or Skype

2. Visibility: They are notoriously hard to spot because they sometime hide in plain sight (Flipboard) or slowly grow to prominence through the internet grapevines. Example:Summify

3. Loyalty: Although it might look highly unconventional e.g. typing on a touchscreen, users are converts that adamantly and genuinely buy into the idea and want to change their existing habits.

4. Experience: Most disruptions share the same challenges in debunking the status quo. They sometimes lose these battles despite being superior in some cases. Most often they lose because people base their verdict on similar but not identical past events. Example:Open Source.

Signs
Now how to spot potential disruptions in legal technology:

Mobile: mobile is not a device, app or technology per se. I rather see it as an environment. It is about doing legal research behind a desk or during a meeting, in a court room but also your living room and even your car. One should be able to switch between these environments seamlessly. Key is adjusting a service to recognize, adapt and be simple enough to use in each settings. Example: Yahoo Axis

Social: In no others industry is ‘Partnering’ such a fundamental part of the business as in the legal market. Although the ‘Partners’ concept works a bit different in practice, the principle remains: to connect, exchange and collaborate to achieve a mutual goals more efficiently. Any service that leverages this principle exponentially will be disruptive.

Consumers: Bring Your Own Device (BYOD) and Consumerization are current trends that actually reveal an underlining movement: Companies are forced to think and act more like regular consumers. Especially while pondering IT decisions. This also mimics the cultural shift in work-life division where the job moves outside the office and beyond the business days.

Value: While value was generally ruled by scarcity in the physical world it is now a moving target in the digital space. Business models based on physical rules have gradually made way for another models based on different rules. Now services are able to invert the value of commodities and when that happens they will most likely succeed to disrupt.

Future
Imagining a future disruption in the legal technology space could be as simple as looking at current disruptions in the consumer market. A legal technology disruption might not originate from a existing legal technology player. It may not be based on superior technology or better curated content. It just might be that the very basic problem legal tech is trying to solve is (inadvertently) solved in a different more efficient fashion by someone else.

In hindsight all evolutions seem self evident yet they are notoriously difficult to predict…or it may be just a matter of looking at it from another angle. So let’s stop looking for disruptions and create them by starting at the end and work our way to the beginning.